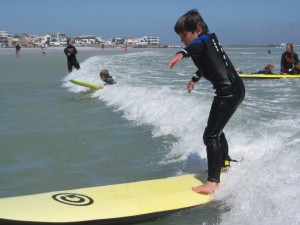 We were greeted by 5 energetic 8 year olds at Big Bay on Saturday. My assistant coach, Sarah-Jayne with the help of another friend tried very hard to calm the little guys down for a brief moment to put on their wetsuits. They only way we could convince them to concentrate was by telling them they would look like a super hero once the wetsuit was on. Moments later we were on the sand going over the basics of how to lie on the board. Most of the boys were rolling around or  drawing in the sand during this time but amazingly when we ventured into the water, everything we had told them on land they put into practice! The little guys were awesome in the water and so only minutes later we had progressed to the standing up phase of the lesson.

A combination of athletic ability and their lower centre of gravity resulted in all 5 boys popping up on the first wave and riding it all the way to the beach. They shreiked as they rode their wave. What an awesome experience to witness groms experiencing the stoke for the first time! 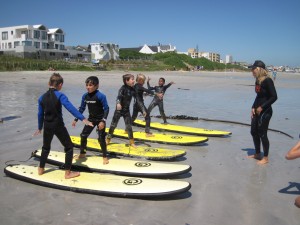 After an hour, all 5 of them suddenly melted down. After sugaring up on some birthday treats they were all back in the water ready to get some more of the good stuff. After 2 hours we literally had to drag these groms out of the water they were having such a blast! One or two of the parents also gave it a whirl.